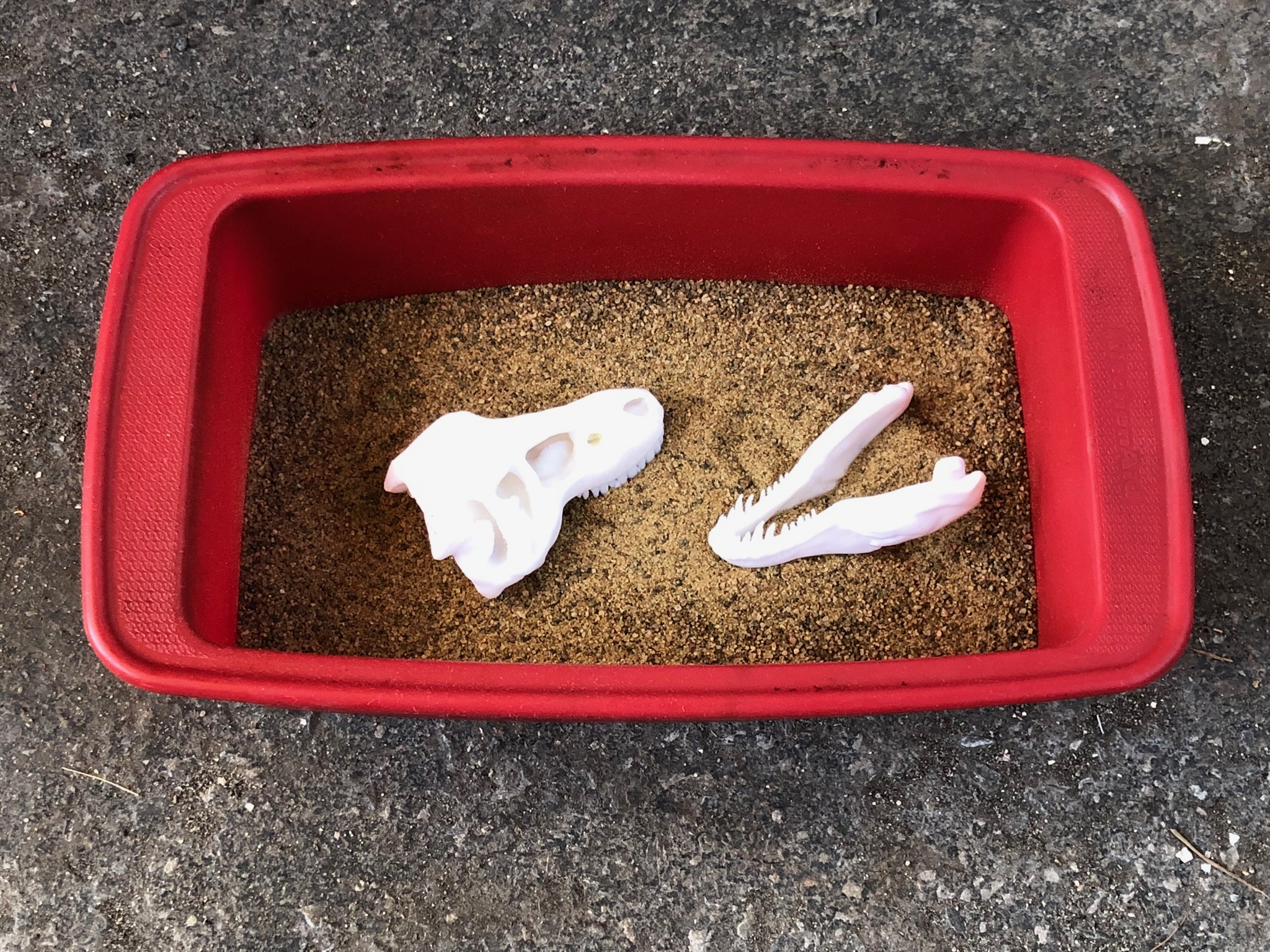 Week four of themes has brought us to a big favourite – prehistoric creatures (also known as dinosaurs and all their friends). We spent two full weeks on this theme as we were having too much fun to switch it up.

Walking Dinosaurs
I saw this cool demo and we figured with a few alterations, we could make them look like dinosaurs. We cut out the basic shapes and the kids coloured & folded them and soon we had (kind of) walking dinosaurs! This activity is a bit finicky but really neat once it gets going.

Melting Dinosaurs
Using this Dinosaur Excavation activity description, we froze two little dinosaurs in baking soda eggs and used vinegar to excavate them. To make this (and other activities) happen, we borrowed half a dozen dinosaurs from a neighbour – thanks, Emily!

Dinosaur Footprints
We used this reference for the size of dinosaur footprints to draw out some T-rex footprints along the driveway. Simple + fun!

Digging for Bones
We ran out of filament before printing the whole body, but managed to get this T-Rex skull from thingiverse printed. We buried it in some sand and the kids used brushes and small shovels to dig it out.

Lava Simulation
This took a couple of tries but with some household ingredients we made a cool demo of lava growth. The idea and recipe came from a youtube video about creating a fire snake. This was a nice follow up to Bill Nye’s episode on volcanoes and some reading we had done.

Bird Sightings
We have been trying to run Beavers each week as a family, to preserve a bit of kinder kid’s regular routine. This week we talked about how birds are the closest living creatures to dinosaurs. The kids created their own cardboard tube binoculars and we went for a walk to look for birds. We found a few, but then found a giant heap of ants which was more exciting.

Drawing Dino Shadows
We set up some dinosaurs on white paper and tried to trace the shadows. We chose this as an indoor activity for a gloomy day, but then realized the gloom made shadows rather difficult. This didn’t quite turn out as planned, but hey the kids were happy to spend some time drawing in their pjs.

Hatching Breakfast
We inherited this box of instant oatmeal from family members after they left town. It served up some fun at the breakfast table for the preschooler.

Other things we didn’t get to:
I love these Cardboard dinosaurs and have seen other people make them with quite a bit of success. We just didn’t make the time to cut them out.

Puzzle
We have had this hand-me-down puzzle from a neighbour for a year or so. Kinder kid is old enough to do it by himself now so we brought it out for him to try during quiet time.

Some simple colouring sheets we already had inspired kinder kid to start his own book.

There are so many resources out there. Here are a few we printed out:
Triceratops Worksheet

Tracing words that begin with d

We have this collection of magazines from when I was a child. They were a subscription and I remember it being one of the coolest things ever to receive – anyone remember these? I have four binders full of mint condition dinosaur-packed magazines from the 90s, though I’m wishing I still had the glow in the dark t-rex bones. While some of the information has since been updated, the kids loved reading through them.

Lego Jurassic World: The Secret Exhibit (We borrowed from the library)